Okay this mini is a bit special for me.

Ever since I started playing Warhammer in the early 90s I always thought the giant scorpion mini was awesome.
I only ever saw him in blisters on the shelf and for some reason never bought one. I was way too distracted playing my Undead army at the time which didn't really need him.

As a result eventually he left the shelves and then disappeared from mail order and I never owned one..

I can honestly say this is on my top 10 favourite minis list and I am very pleased to have finally got him.
I assembled him within an hour of getting him and he will be painted within the next few weeks once I A) finish painting flesh tearers
B) decide which scorpion from the real world I want to base the colour scheme on.

but for now here he is in his leaden glory.. 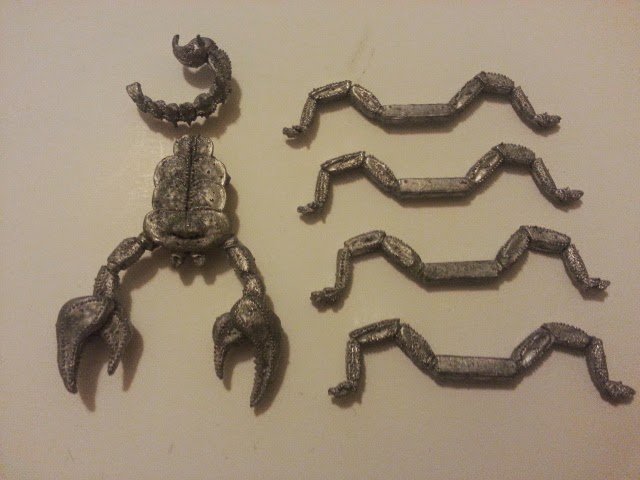 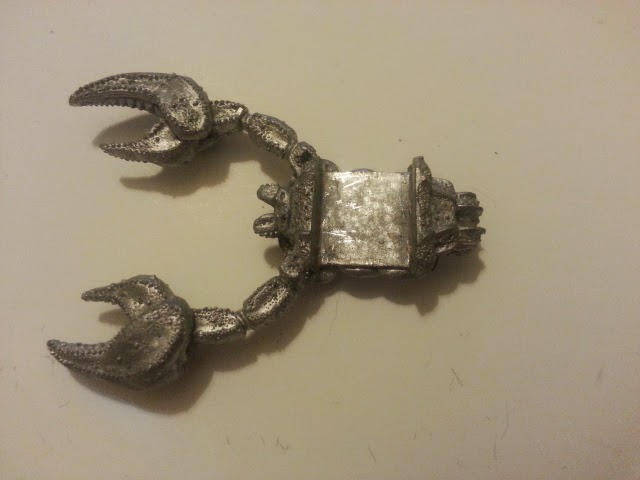 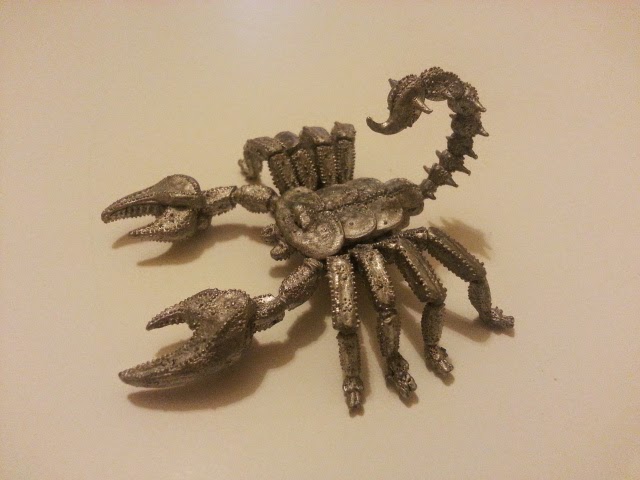 Okay I'm still finishing up the flesh tearer army so no painted lead this week but I should be done in the next week or so. After that I should be back to painting some proper old-school minis..

until then here is a small teaser of some nice bits I got for my Orc and Goblin army (yes I have a large greenskin army too).
I am in the process of stripping 20-30 years of paint of the main part of the O&G army so no real pics of the main force yet but hopefully this little teaser will get you started.

These all came in a trade from a good friend of mine for a large part of my modern chaos army that I no longer play.

This is what it all looked like once I unwrapped it all. 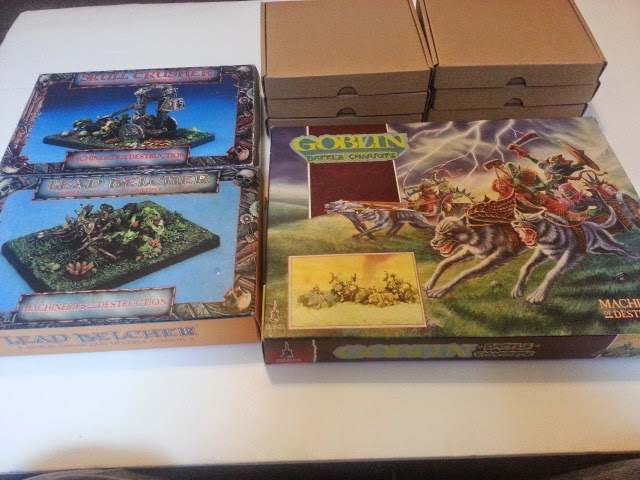 Already you can see the obvious goodies here.

A box set of goblin battle chariots.. I love the old boxes the all have stories and special rules on the back of them. I took some pics of the backs so you can read for yourself. these old minis are all full of character. 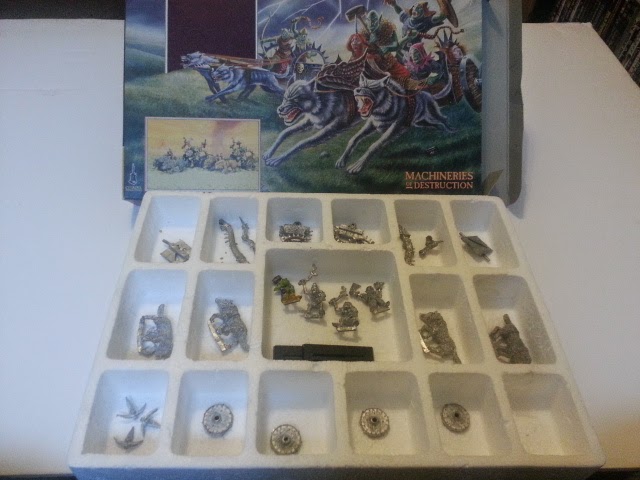 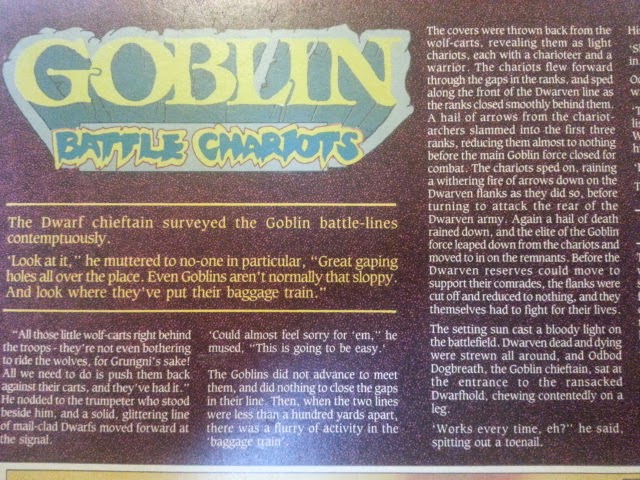 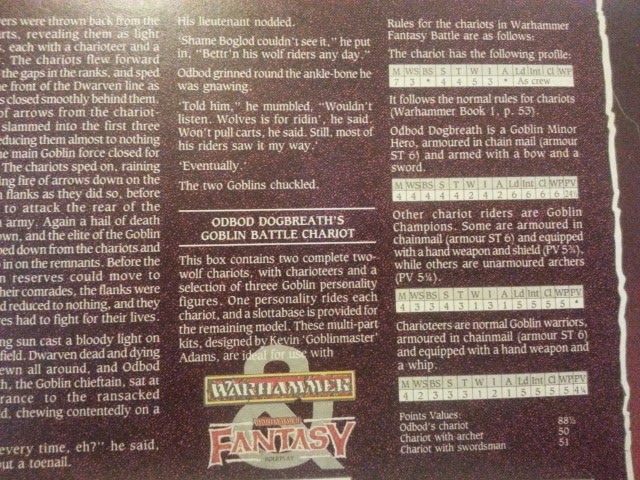 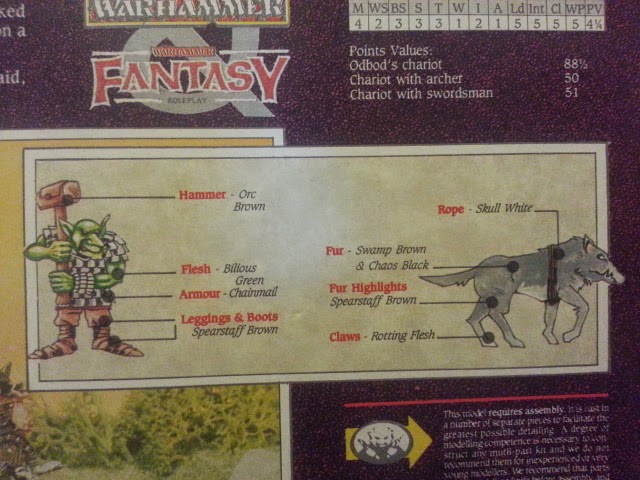 Next up is a boxed Skull Crusher. the back tells the story of how an army of goblins defeated a dwarf army at Karak-Azul and stole this from them. Its quite unusual as the skull crusher is a magical machine that talks to the goblins. 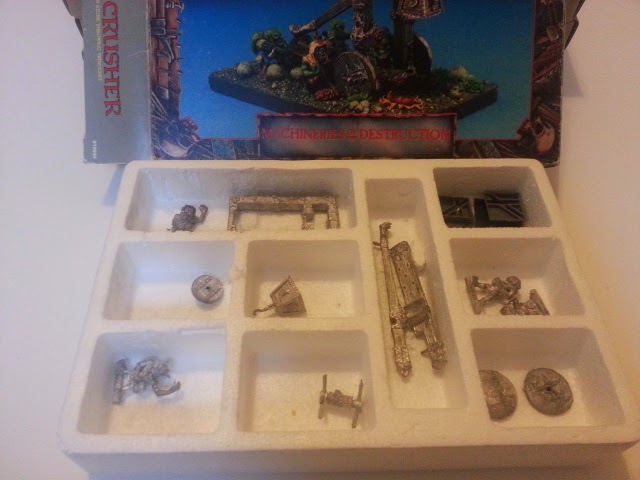 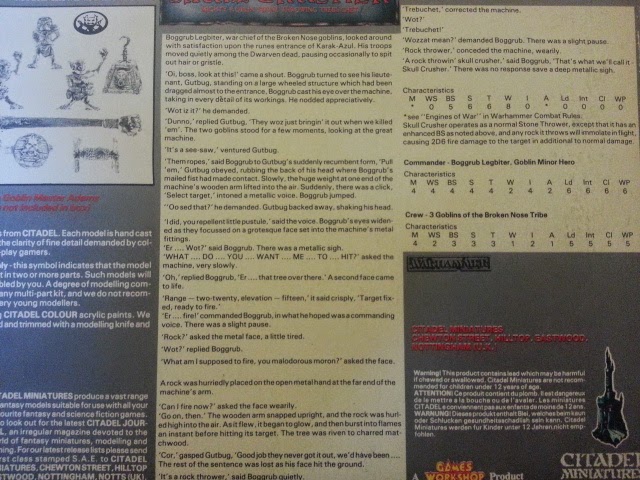 Last of the box sets is a Lead Belcher. Again with a great back story which includes the skull crusher in it and how the same army moved on with the skull crusher to defeat more dwarves and then get this machine as well. It gives a good narrative and lots of ideas on how to base further games. 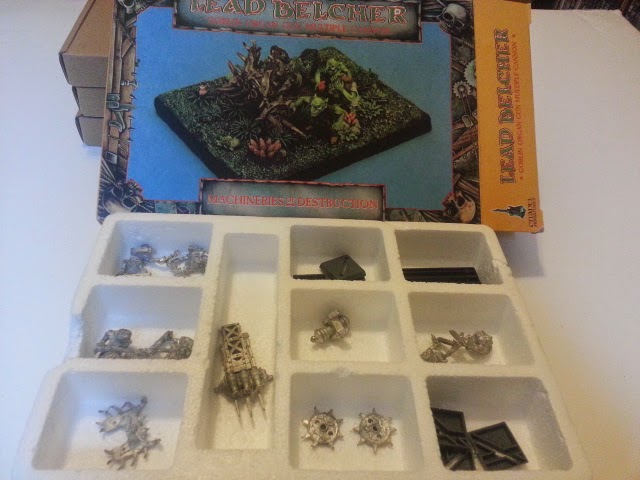 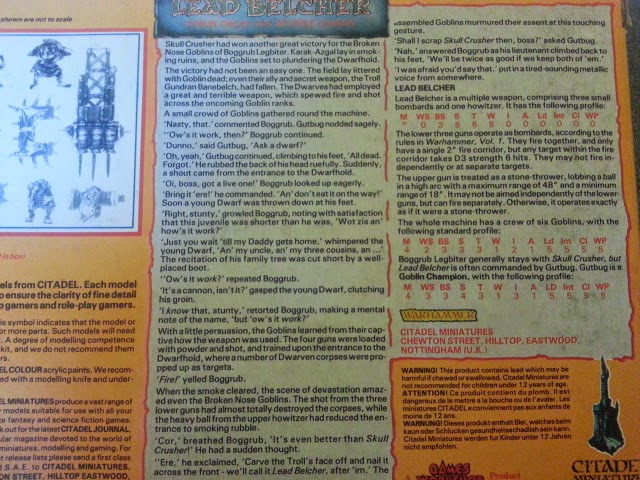 Lastly is some of the lead that came in the smaller brown boxes. Not everything in them is listed here as it was not just orcs and goblins. the rest will turn up in a later post at some point.

I got some more goblins, lots of savage orcs and some regular orcs... 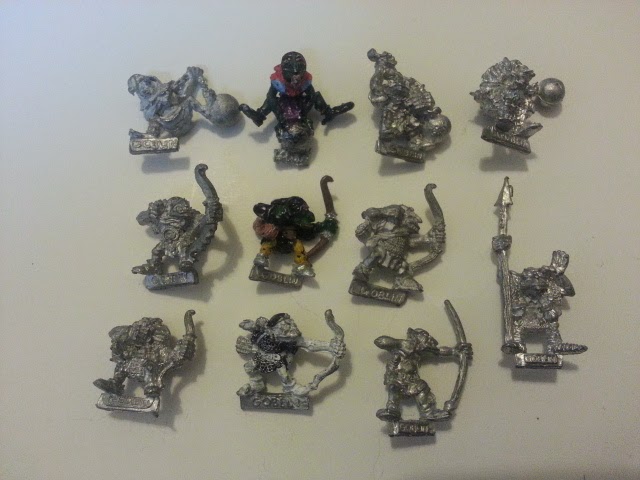 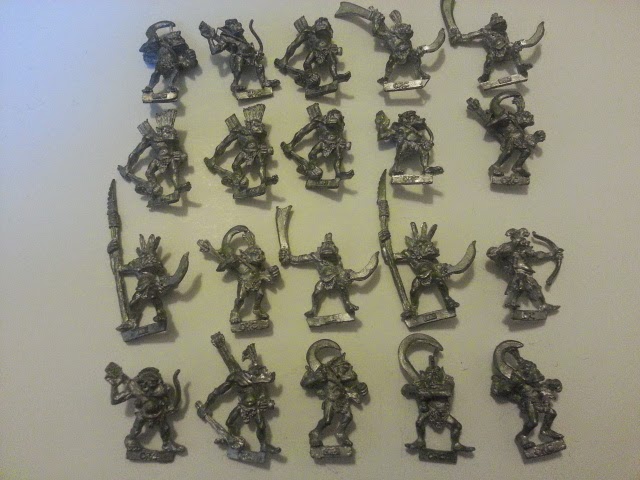 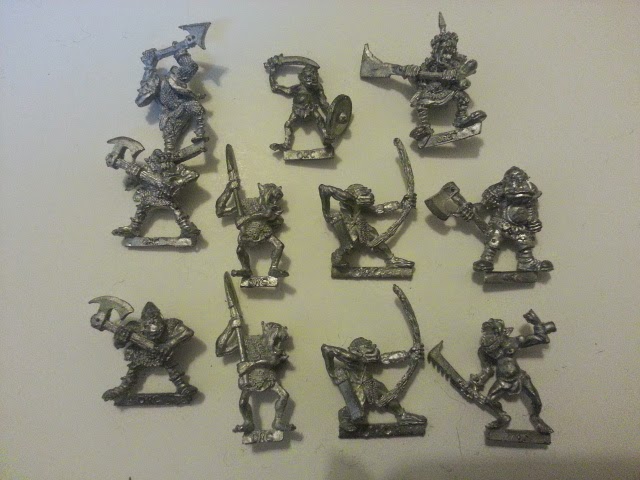 Stay tuned for more of my Orc and Goblin army in the near future and my start of painting it assuming I don't get distracted in the next few weeks..

Hi all,
another sporadic post for you today.. Painting on my undead is slowing at the moment due to me still painting Flesh Tearer Space Marines for a friend and the fact that I have started assembly of some of my orc and goblin army war machines and chariots (They will be getting there own posts soon).

Anyway today I have for you my winged vampire from the night horror range. He looks good from a distance but when you study the mini up close you realise how poor a sculpt compared to the rest of the range he is :(
I'm not even sure he is wearing any clothes as he doesn't have a belt at all. Maybe it should be ethereal mist for his lower half.. 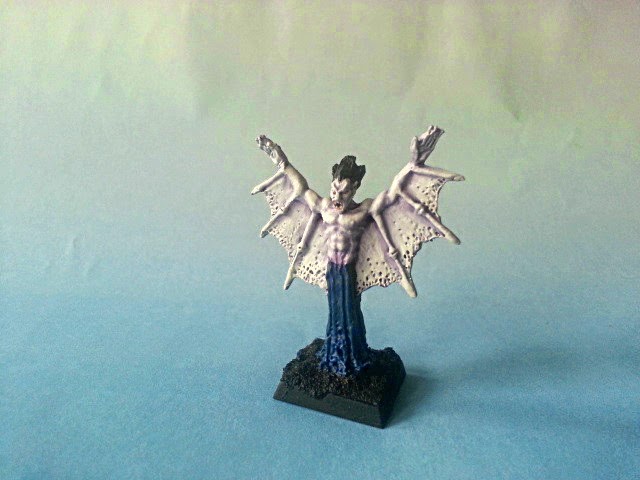 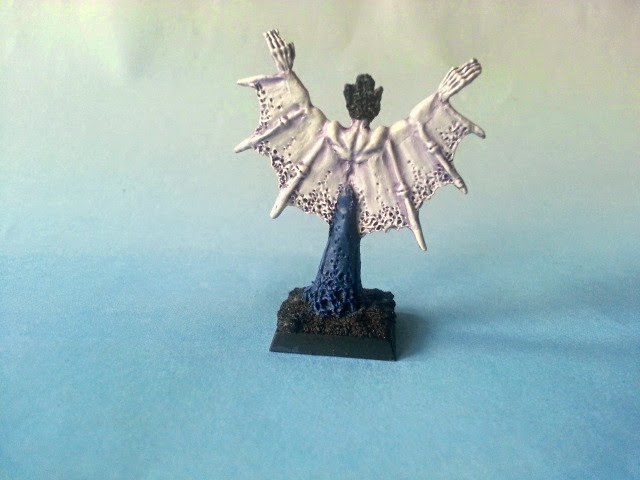 Well weeks with nothing and 3 posts all in quick succession.. These guys are the start of my death rider cavalry for my undead army. I have around another 16 or so to paint but they are not a lot of fun to do so will probably be done sporadically inbetween other projects.
So far I have 2 regular troops, 1 of Bob Olley's death rider champions (guy with bronze wings) and a Liche character to add to my selection of various hero minis. 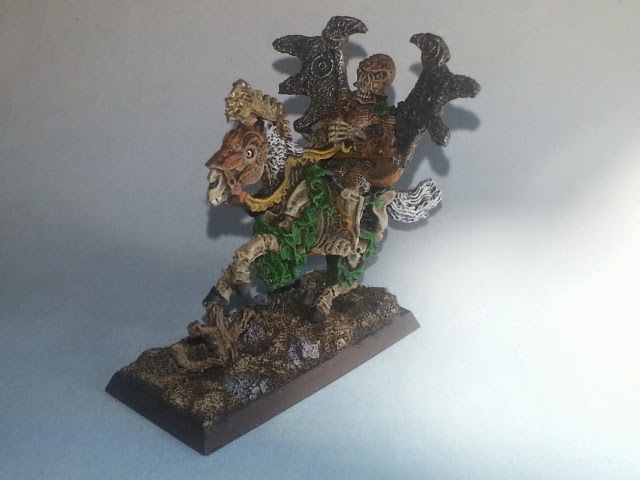 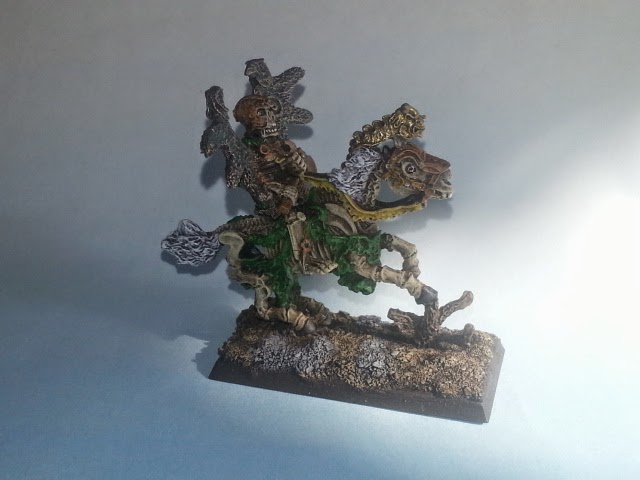 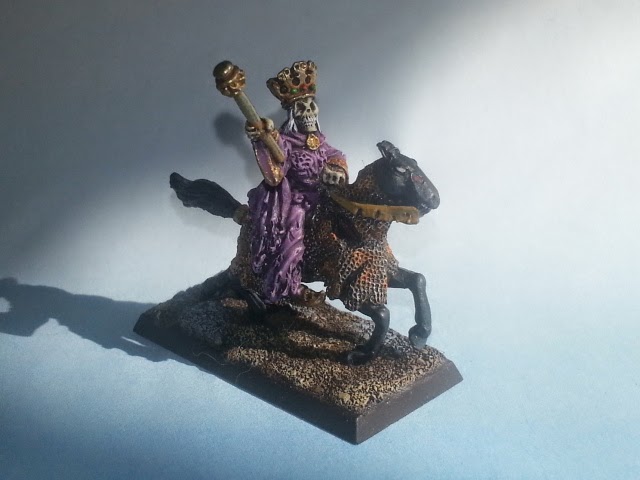 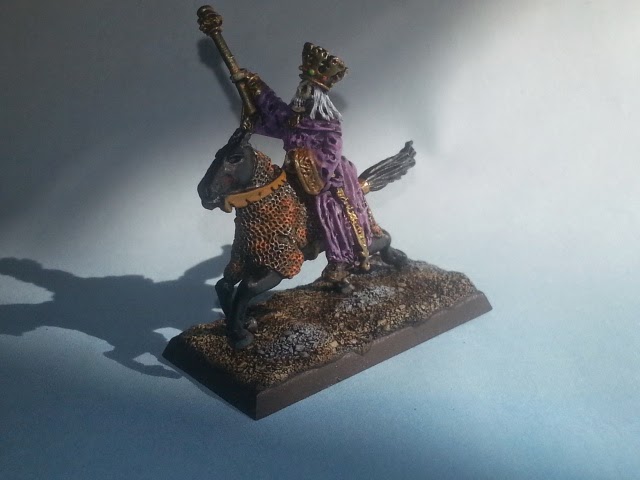 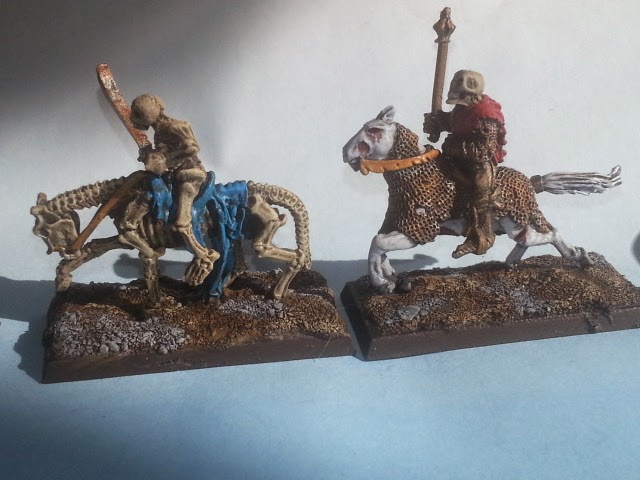 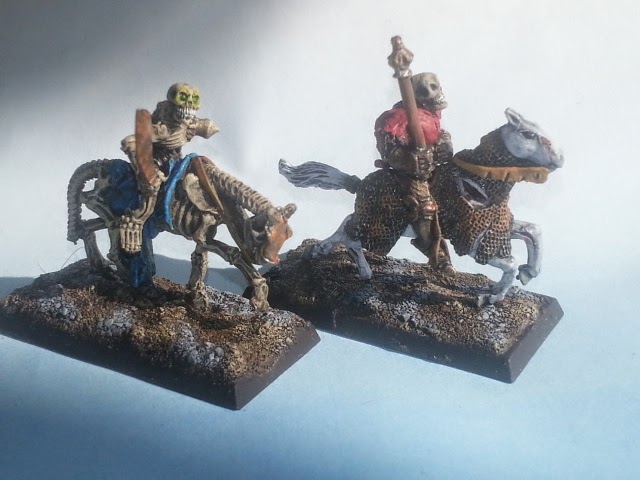 Well that's everything so far. More updates as I get stuff painted so stay tuned..

Okay a quick post today... 3 more ghosts have joined the ranks bringing the total to 9 so far. 1 is a preslotta citadel ghost with lantern, 1 is the 4th edition ghost with his arms outstretched and the last is a grenadier ghost mini I have in the box of grenadier minis.
I'm not 100% sure I like the 4th edition sculpt (I never really liked it much) but it does herald back to my early fantasy playing days from when I started warhammer in the early 90's so its in.. 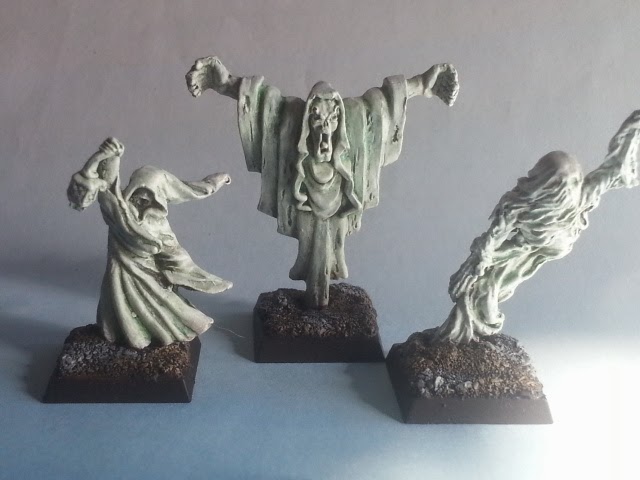 Okay the first of a few updates here.. I have been painting a bit recently and below is something I did last weekend.
This mini is very small compared to others of the same range probably something to do with being a naked female so no clothes to bulk out the mini..
Some ghosts and death riders up next. 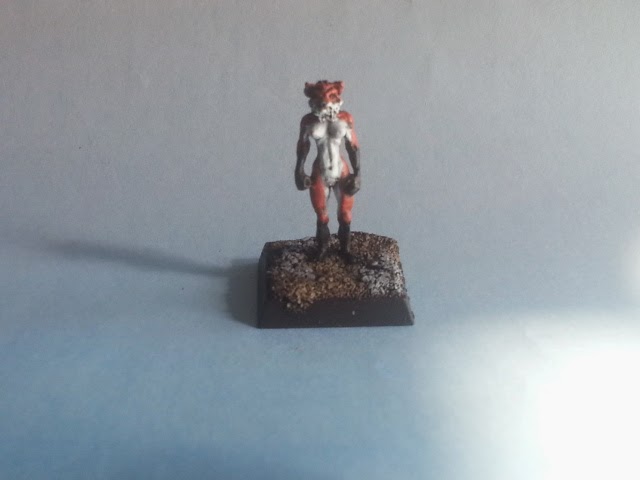 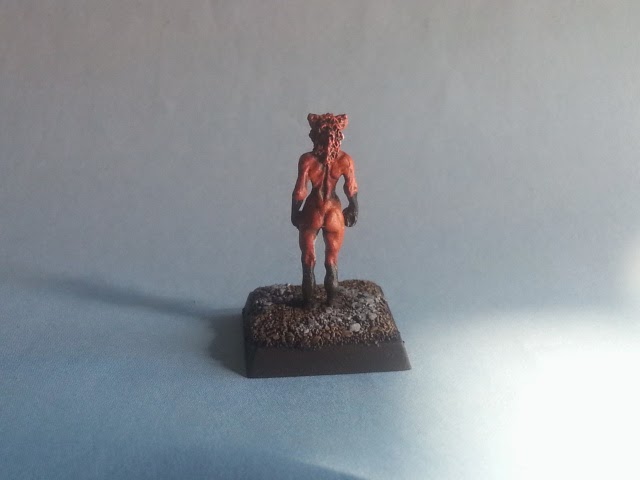 just a quick post to say I am still here.
PC has been dead for nearly 2 months which has also resulted in a lack of motivation for painting :(

I have been assembling a lot of RT and 2nd edition Orks recently and am in the middle of painting some new plastic marines for a friend.

Normal service and bad pics will be resumed soon....